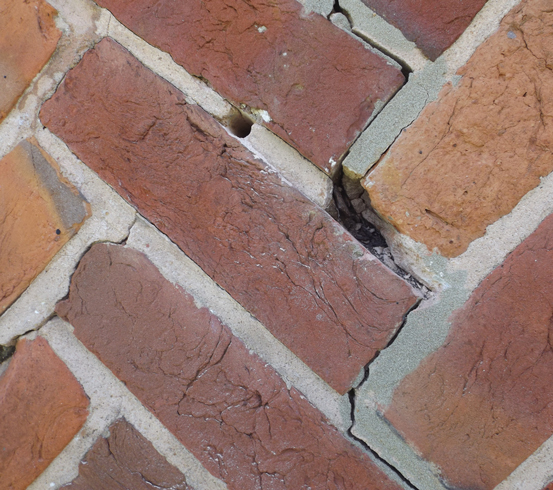 Herringbone brickwork was an extremely popular feature of houses constructed in the outer suburbs of London during the 1920s and 30s. Known as ‘mock Tudor’ houses, the attractive structures were created by laying bricks at an angle of 45 degrees, the next layer being laid in the opposite direction to form brick coursing of a zigzagging ‘W’ shape.

The owners of such a property recently made successful use of the Twistfix Find-a-Contractor service, quickly locating a registered contractor to investigate and remedy the vertical zigzag cracks that had suddenly appeared in the framed herringbone façade of their home in South London. Permafix-London quickly visited the property to complete a full survey and establish the reason for the unusual patterns of cracked brickwork.

The Herringbone brickwork panels were found to be a non-structural decorative feature and it is the timber frames that serve as load-bearing elements. The outer brick panels are secured to the inside leaf with cavity wall ties which, upon inspection at this particular property, were revealed to have seriously corroded, forming a build-up of iron oxide layers which expanded the ends of the cavity tie-irons. The expansion of the steel had forced brickwork apart and had caused the cracking of the herringbone brickwork panels, from one tie position to the next.

More detailed examination in other areas of the building revealed that areas of supposed ‘Flemish bond’ brickwork, which normally indicates the presence of a solid-wall construc­tion, was in fact a cavity wall originally built with ‘snapped headers’ between ‘­stretchers’. Here, a series of horizontal cracks was plainly evident; this is a more typical visible symptom of corroded wall ties.

David Cole is the Managing Director at Permafix-London and, commenting on the property, said: “The problem with houses that imitate those of an earlier era is that the construction is never as it initially appears. Once we had established that the issue was simply one of corroding wall ties it was easy to design a solution to remedy the defect using the guidance published in Building Research Estab­lis­hment Digests 329 and 401.”

Contractors from Permafix-London proposed and subsequently implemented a solution involving the installation of nearly 300 mechanical wall ties obtained from the Twistfix collection of products. Each wall tie is fitted with expanding Neoprene sleeves which, tightly gripping the brickwork on either side of the wall cavity. After the ties were simply yet securely fitted, the corroded wall ties were isolated so that further expansion forces would be fully absorbed within a compressible foam encapsulant, ensuring that further masonry cracking is prevented. The work was finally made good, with all cracked joints repointed to exactly match the existing aesthetic and conceal the successful repair.

Are you a Twistfix-registered contractor? If so, we invite you to share details of your current projects to feature in our newsletter, which reaches thousands of people. If not, why not register your skills so that we can match them with clients seeking local contractors with a specific skill-set.  Check out details of the Twistfix Registered Contractor scheme.